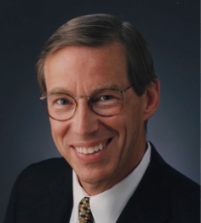 Professor Lauren Holinger gave his Semon Lecture on the 7th of November 2003 at the Royal Society of Medicine. Holinger’s lecture represented the first time that a father and son had both delivered this lecture, with Dr Paul Holinger delivering his lecture back in 1960. Holinger’s lecture explored various laryngeal conditions and how they are best managed, such as through an endoscopic or surgical approach.

Lauren Holinger was born on the 9th of August 1942 in Illinois, America. After completing his fellowship training under Dr Paul Holinger, father and previous Semon Lecturer, he later became Professor of the Department of Otolaryngology – Head and Neck Surgery at Northwestern University. As well as lecturing internationally, ranging from Chile and Singapore to Japan and many more, Holinger is also the recipient of a number of awards, including the Chevalier Jackson award of the American Broncho-Esophagological Association and the Bruce Benjamin Medal of the Australian Society of Paediatric Oto-Rhino-Laryngology. As testament to his achievements, Holinger has been elected as President of a number of societies, such as the American Laryngological Association and the the Chicago Laryngological and Otological Society.