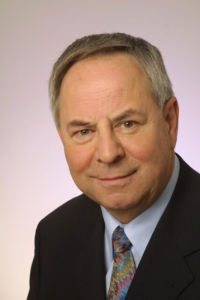 Professor Wolfgang Steiner presented his Semon Lecture in 2004. His lecture starts by explaining the current use of excisional biopsy for laryngeal and hypophyseal cancers and then explores the potential of transoral laser microsurgical resection as a more effective and efficient treatment. Steiner cites a number of benefits to this newer procedure, such as the ability to repeat laser surgery and lower morbidity. He concludes that with more experience, even larger tumours would be able to be treated in a similar manner.

Wolfgang Steiner was born in 1942 in Crailsheim, Germany. He has had a hugely successful international career in ENT and Head and Neck Surgery, having been credited with pioneering a paradigm shift in the way laryngeal cancer is surgically managed. Steiner has given a number of eponymous lectures around the world, including the Wilson Lecture in Hong Kong, received international prizes, such as the Albert C. Muse Prize for “Excellence in Otolaryngology” in America, and published over 200 scientific articles as well as a number of books.