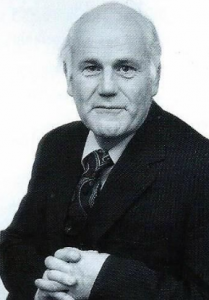 Mr Robert Pracy presented his Semon Lecture in 1980. He highlights in his lecture that children are not just small adults and that future growth needs to be considered when choosing treatments. Pracy also discusses advances in technology in aid of hearing aids, diagnostic recordings, new drugs and notably CO2 lasers. He points out that the new paediatric problem is not the removal of tonsils, but middle-ear fluid.

Robert Pracy was born on the 19th of September 1921 in Warwickshire, England. Early in his career he spent some time completing his national service, during which he learnt Italian. After he returned permanently to England, he specialised in ENT surgery and more specifically paediatric ENT, for which he became internationally renowned. In honour of his achievements, he was invited to give a number of eponymous lectures and was also elected as President of both the British Association of Otolaryngologists and the Otolaryngology Section of the Royal Society of Medicine.