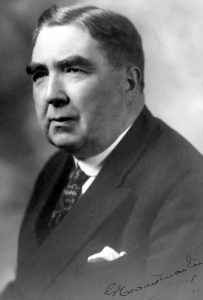 Mr George Ewart Martin presented his Semon Lecture in November 1948. During his Lecture, he laments the spread of bronchoscopy into general examination, no longer in the hands of specialists and thus not being properly taught. He highlights the importance of an endoscopic department, as an intermediary between the physician and bronchoscopist.

George Martin was born in 1889 in Inverness, Scotland. Throughout his career, he was widely known as an endoscopist and was the first to treat, but not cure, bronchiectasis with bronchoscopic lavage. During the war, he was a part of the Royal Army Medical Corps and was one of their first ear, nose and throat specialists. He was also elected President of both the Scottish Otological and Laryngological Society and the Section of Laryngology of the Royal Society of Medicine.