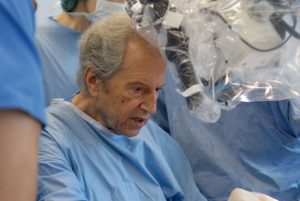 Professor Ugo Fisch delivered his Semon Lecture in 1997 at the Royal Society of Medicine. His talk centred around exploring who was responsible for forming skull base surgery before moving on to highlight the approaches that can be made through the infra-temporal fossa. In doing this, Fisch expanded on the variety and intricate details of the routes that could be made through the infra-temporal fossa and then the surgeries in which these techniques would be useful.

Ugo Fisch was born in Switzerland and twenty years after starting medical school was made Head of Department and Professor of Otorhinolaryngology at University Hospital, in Zurich, Switzerland. He can speak a number of languages fluently and, as such, is a member of many international societies, such as the Brazilian Society of Otolaryngology, editor for a number of journals, including the American Journal of Otology, and has received various awards from numerous countries.