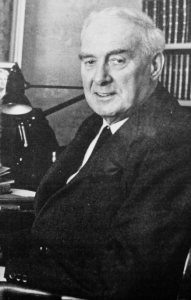 Mr Thomas George Wilson presented his Semon Lecture at the Royal Society of Medicine on the 5th of November 1964. In this, he laments a lack of research into problems of the nose and proceeds to comment that x-ray opacity is not always diagnostic of true chronic sinusitis and that the degree of development is not a major factor in infection aetiology. He also takes time to summarise the causes of infectious diseases of the nose and sinuses and finishes by stating that there is still more room for clinical research.

Thomas Wilson was born on the 1st of July 1901 in Belfast, Northern Ireland. During his career, he played a very active role in the Royal College of Surgeons in Ireland as not only a member but also as Vice-President for two years, followed by President for three years. He also wrote a number of books in his lifetime and, as such, was awarded the Doctorate of Literature in 1941 from Dublin University. Wilson is also the only lecturer to have a criminal record, as he helped stranded airmen in Eire escape to Northern Ireland during the war.