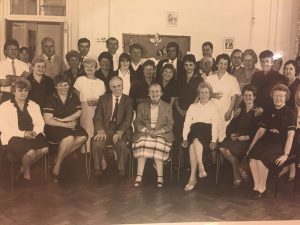 Mr Stephen Higgs Richards gave his Semon Lecture in 1989. During his talk, he started off by speaking about some of the developments that had been made in the past 80 or so years in pituitary surgery. Following on from that, Richards described some of the results he had seen with his patients who had undergone pituitary surgery for various reasons and some of the complications and post-operative treatments necessary and, finally, the results.

Stephen Richards was born on the 8th of April 1928 in Montgomeryshire, Wales. He spent part of his career in the Royal Army Medical Corps as a Regimental Medical Officer before returning to work in civilian hospitals. Here he had a very successful career as an ENT surgeon and published works on veingraft myringoplasty and mastoidectomy using an osteoplastic flap.