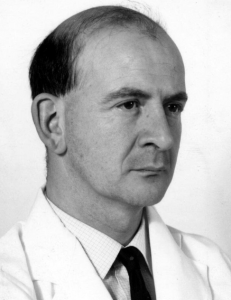 Professor Sir Donald Frederick Norris Harrison delivered his Semon Lecture in 1974 at the Royal Society of Medicine. He spoke widely about the issue relating to the way in which laryngeal cancer was staged and how it wasn’t necessarily accurate as it took into account anatomical location more than the biological nature of the tumour.

Donald Harrison was born on the 9th of March 1925 in Portsmouth, England. He had arguably one of the most successful careers in otorhinolaryngology and delivered nearly every eponymous lecture in otorhinolaryngology both nationally and internationally. Harrison was appointed as both President of the Section of Laryngology of the Royal Society of Medicine and also as President of the Royal Society of Medicine. He also wrote a biography of Sir Felix Semon, ‘Sir Felix Semon: Victorian Laryngologist’.