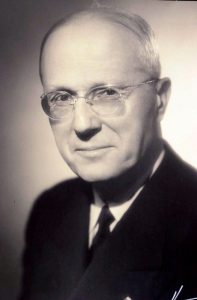 Professor Georges Portmann delivered his Semon lecture on November 1st 1956 at the Royal Society of Medicine. During his talk, he outlines the physiology of phonation, noting that the ‘tonic’ theory is incomplete and proposes the ‘clonic’ theory. Namely, it is not the stream of air which produces vibration of the vocal cords, but the vocal cords which produce the vibrations in air. He demonstrates this hypothesis with animal and human experiments.

Georges Portmann was born in Savoy, France, on the 1st of July 1890. He had a hugely successful career and was regarded as the Father of Inner Ear Surgery. He had the honor of treating the royal families of Spain and Egypt and was also asked to treat Hitler, although he refused. He also played a very prominent role in government and was on many parliamentary committees where he played an active role in fighting for civic rights for women and retirement pensions for elderly workers, among many other notable causes.